For hosting a meeting on Zoom, the recommendation for the “host” is to use a Windows PC with JW Library installed on it, in order to play songs and other media for the meeting. If you have a Windows PC, that’s the way to go! However, some of us only have MacOS and using JW Library isn’t an option (sad face).

There are some options for users with an Apple M1 powered Mac – please see these two write-ups that I did (depending on your current version of MacOS):

How to use the iOS app for JW Library on Apple M1 Machines (including Mac Mini and Macbook Air) (pre MacOS 11.4)

How to Install the iOS version of JW Library on Apple M1 Machines running MacOS Big Sur 11.4 or Later

If you don’t have an M1 powered Mac (Intel based), then the below how-to is for you!

This how-to will show you how to install “BlueStacks”, which is an Android emulator with very high performance, so that we can install and use the Android version of JW Library, which is very similar to the Windows version of JW Library that’s available on Windows PCs. This will then allow you to easily play media from JW Library on your Zoom meeting hosted from your Mac. 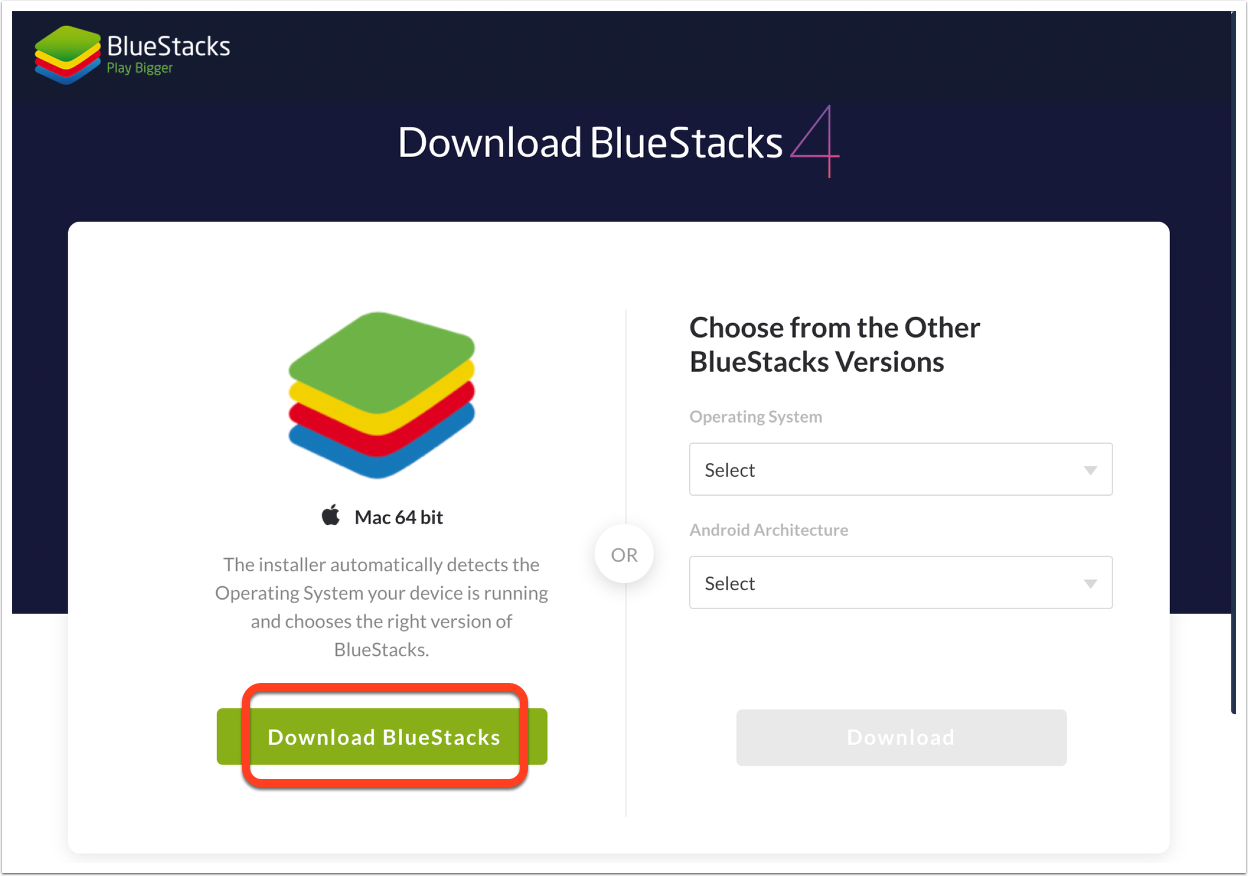 Double-click on the icon for the “BlueStacks Installer” to begin the setup. 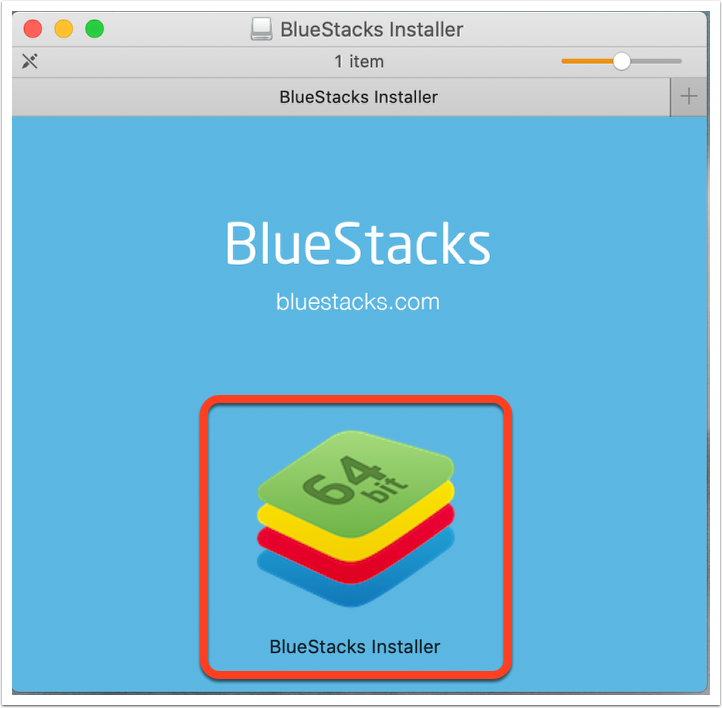 The BlueStacks installer will begin. Click on the “Install Now” button to begin the installation.

It will ask for your MacOS password (if you are using one). 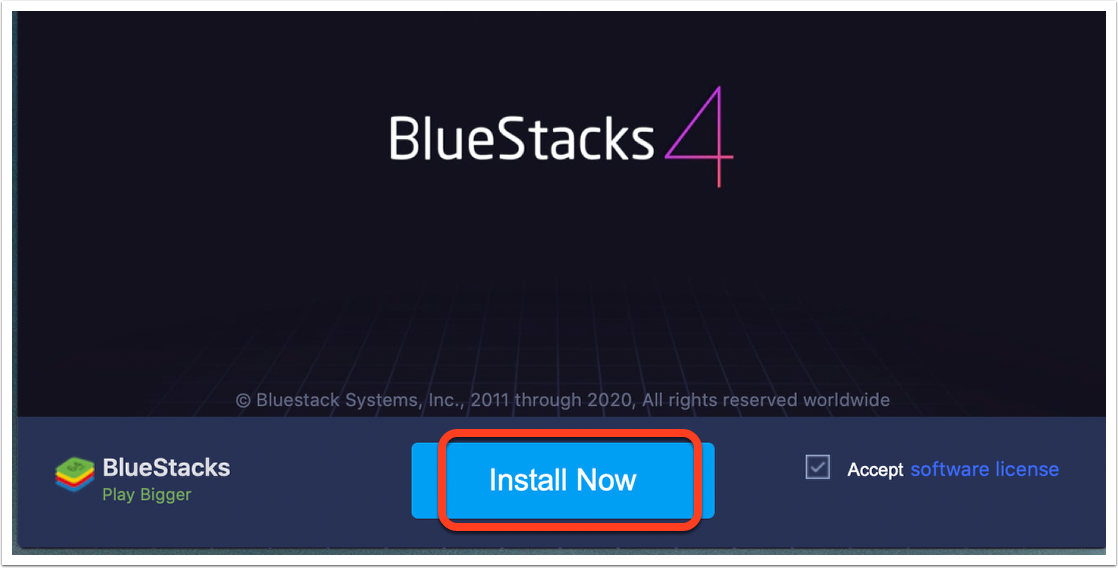 In order to install BlueStacks, you will be prompted by MacOS that it has blocked a system extension. Click on “Open Security Preferences” so that we can unblock the extension (which is required in order for BlueStacks to be installed).

(1) Click on the lock icon at the bottom of the window so that you can make changes to the system. You will be prompted to type in your password.

(2) Next, click on the “Allow” button to allow the installer to run. 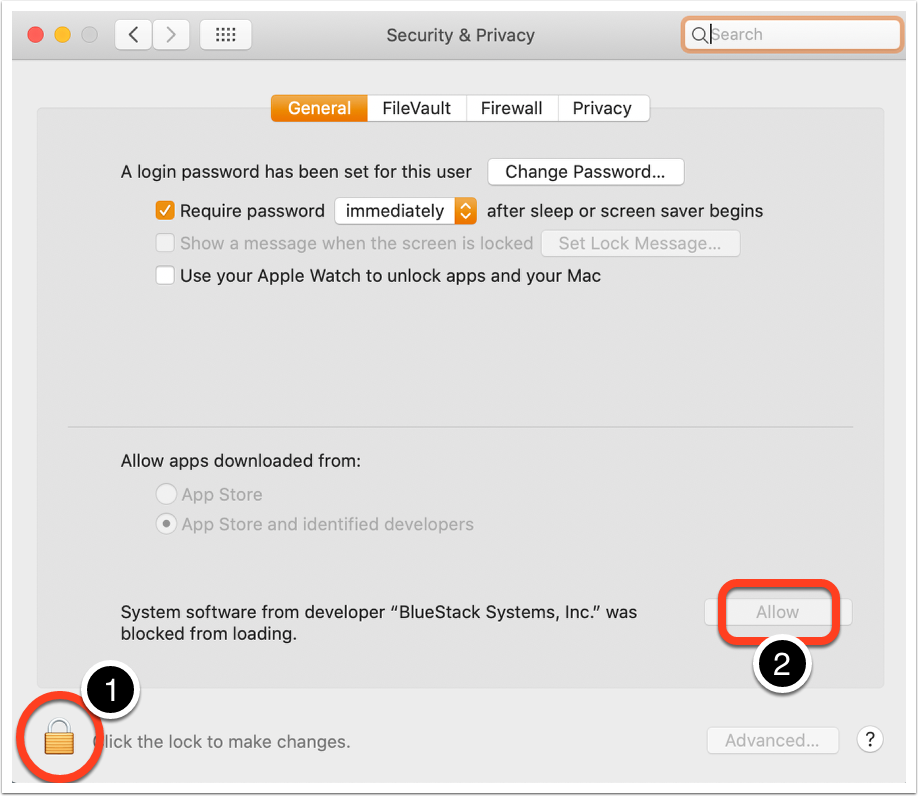 Another message will be displayed that BlueStacks would like to control your computer (which is required to install some of the drivers that it needs).

Under the “Privacy” tab, “Accessibilty” area, make sure that “BlueStacks” is selected. After enabling the checkmark box, you can close this window. 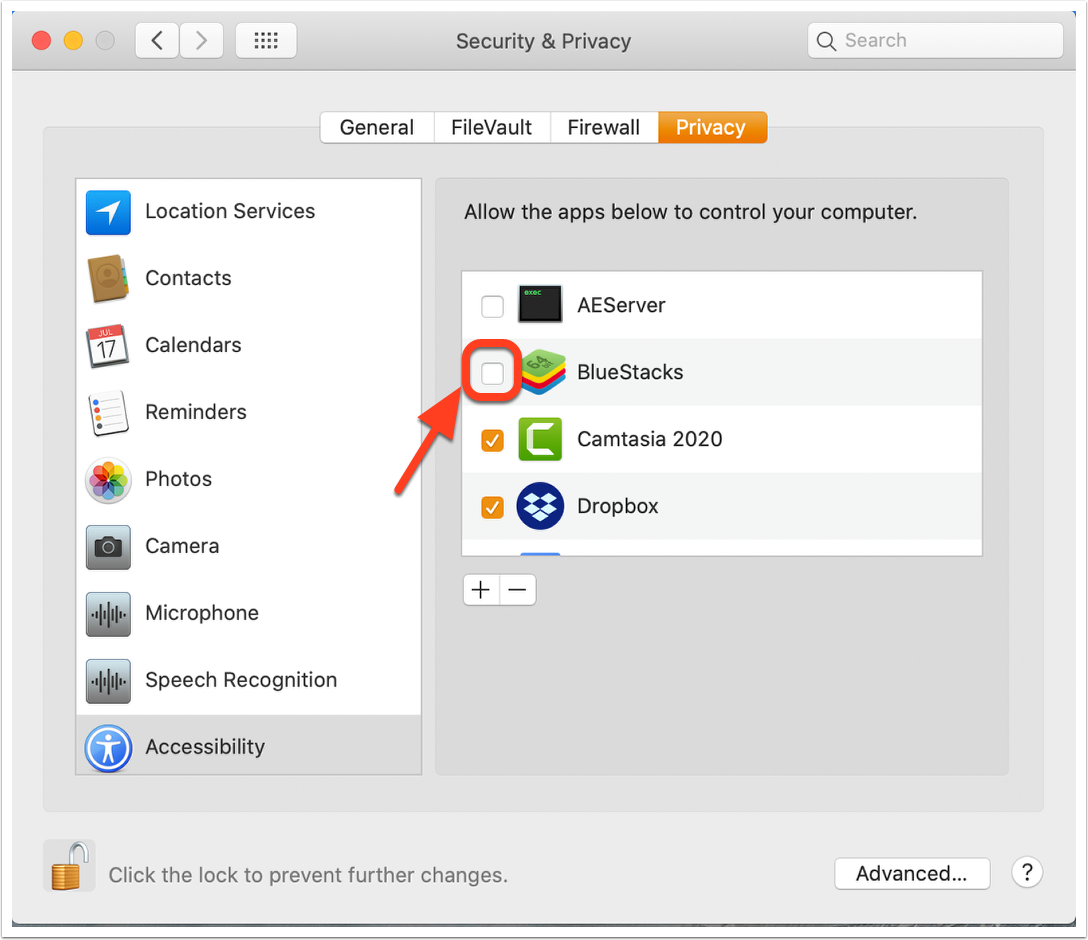 Once the above settings have been changed, the installer will complete and BlueStacks will start. Click on the “My Apps” tab, then click on the “Let’s Go” button. 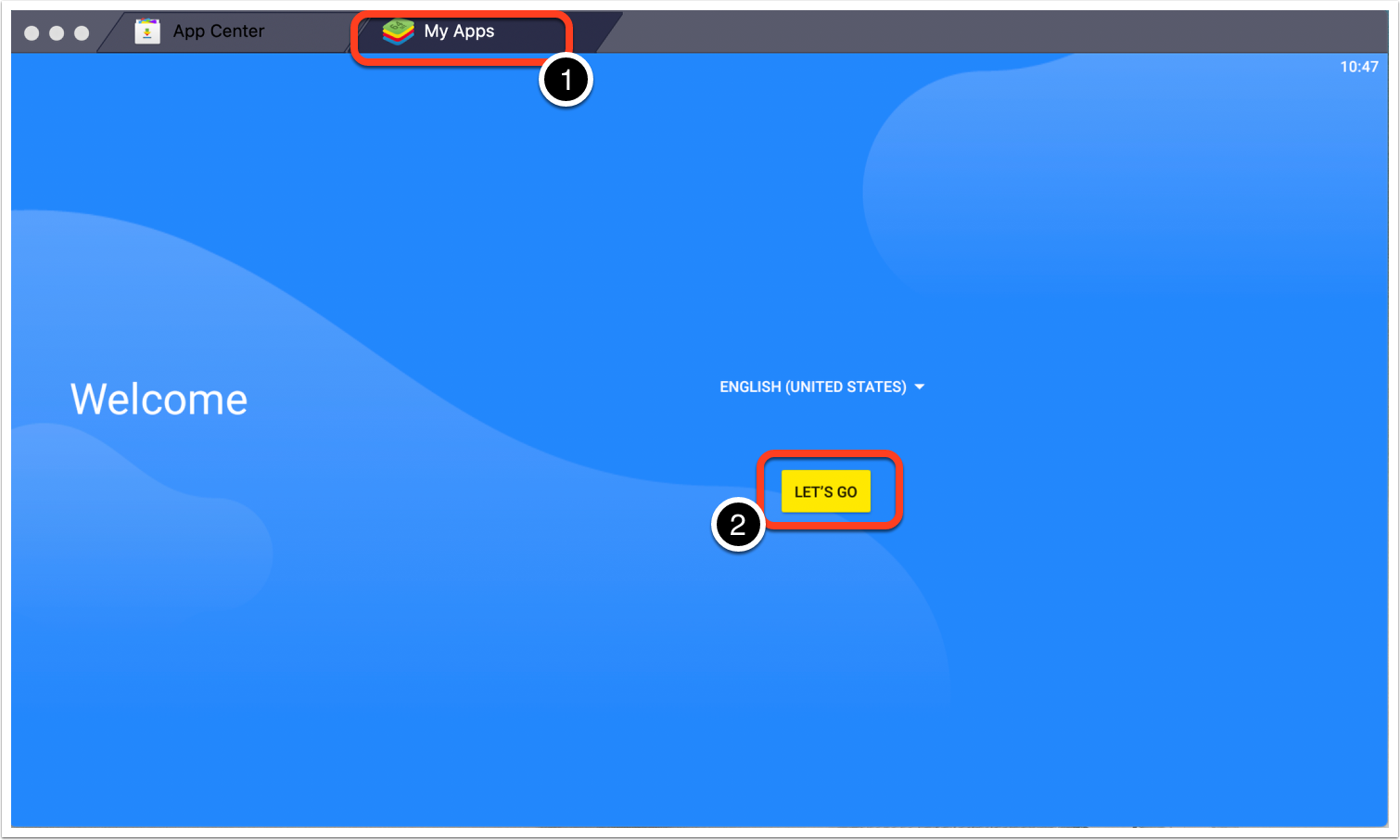 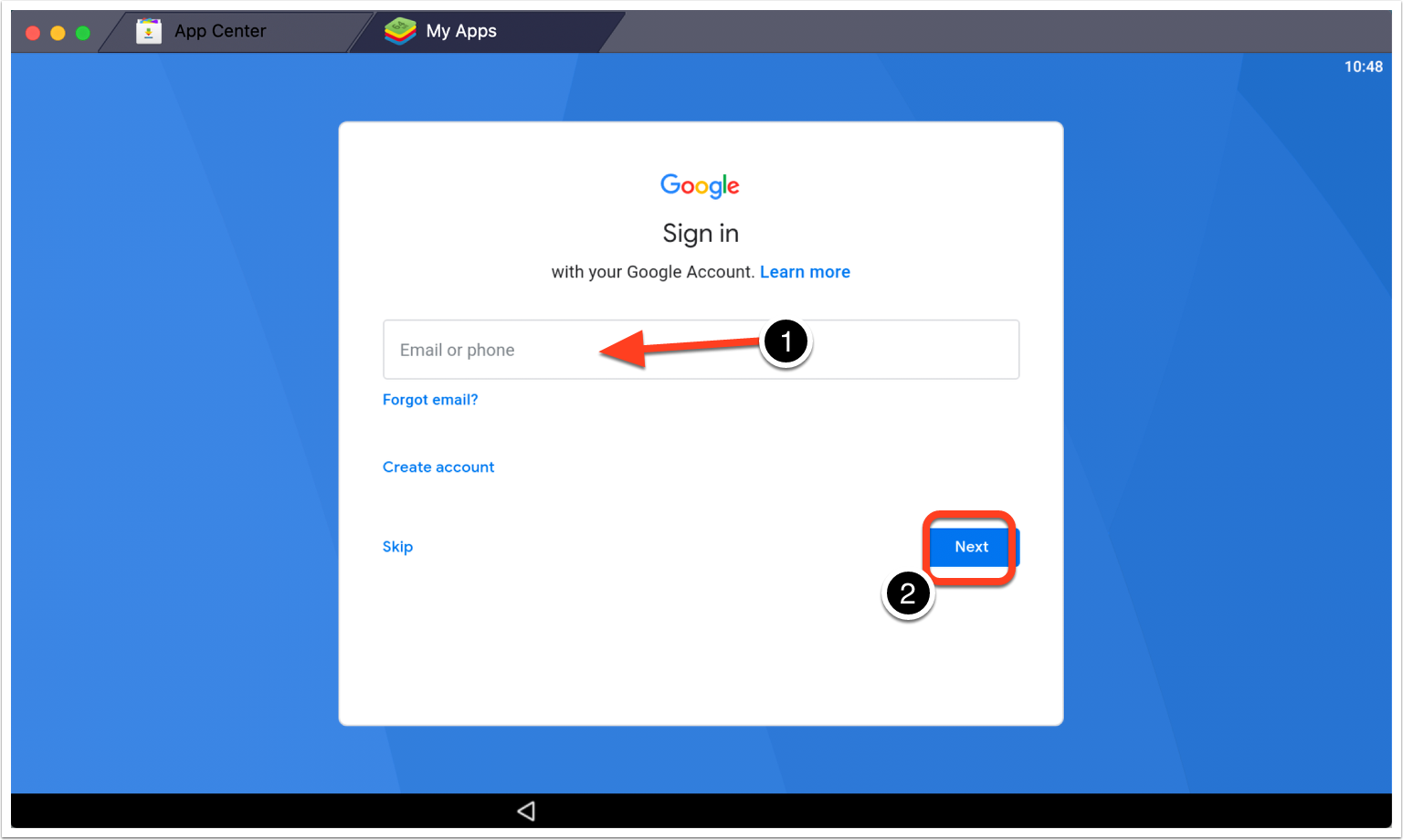 Once you have entered your Google account information, you will be shown the “Main Screen” for BlueStacks, which looks like an Android tablet homescreen.

Click on the icon labeled “Play Store” to begin the process of installing JW Library. 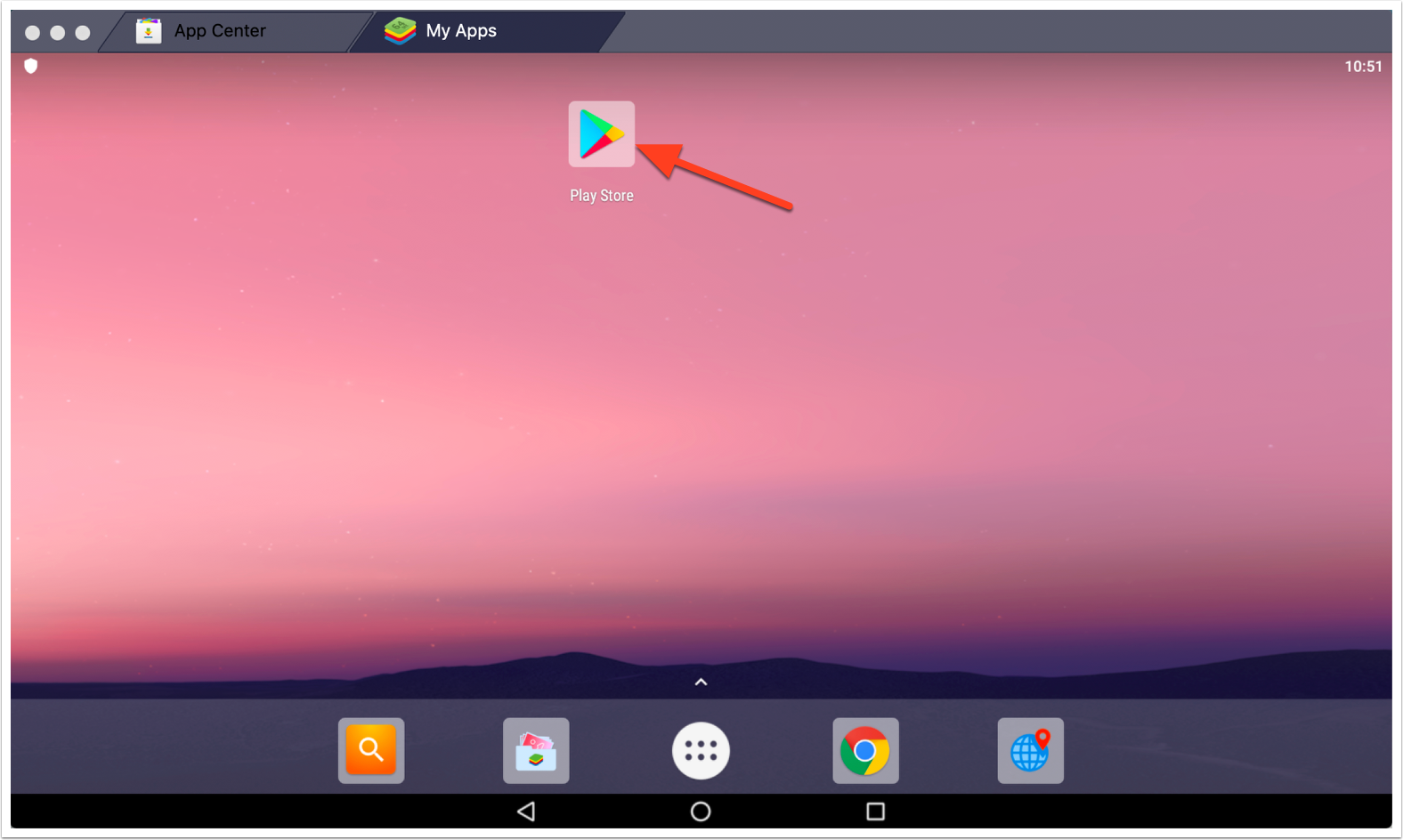 The Google Play store will be shown. Click on the search box so that we can search for the JW Library app. 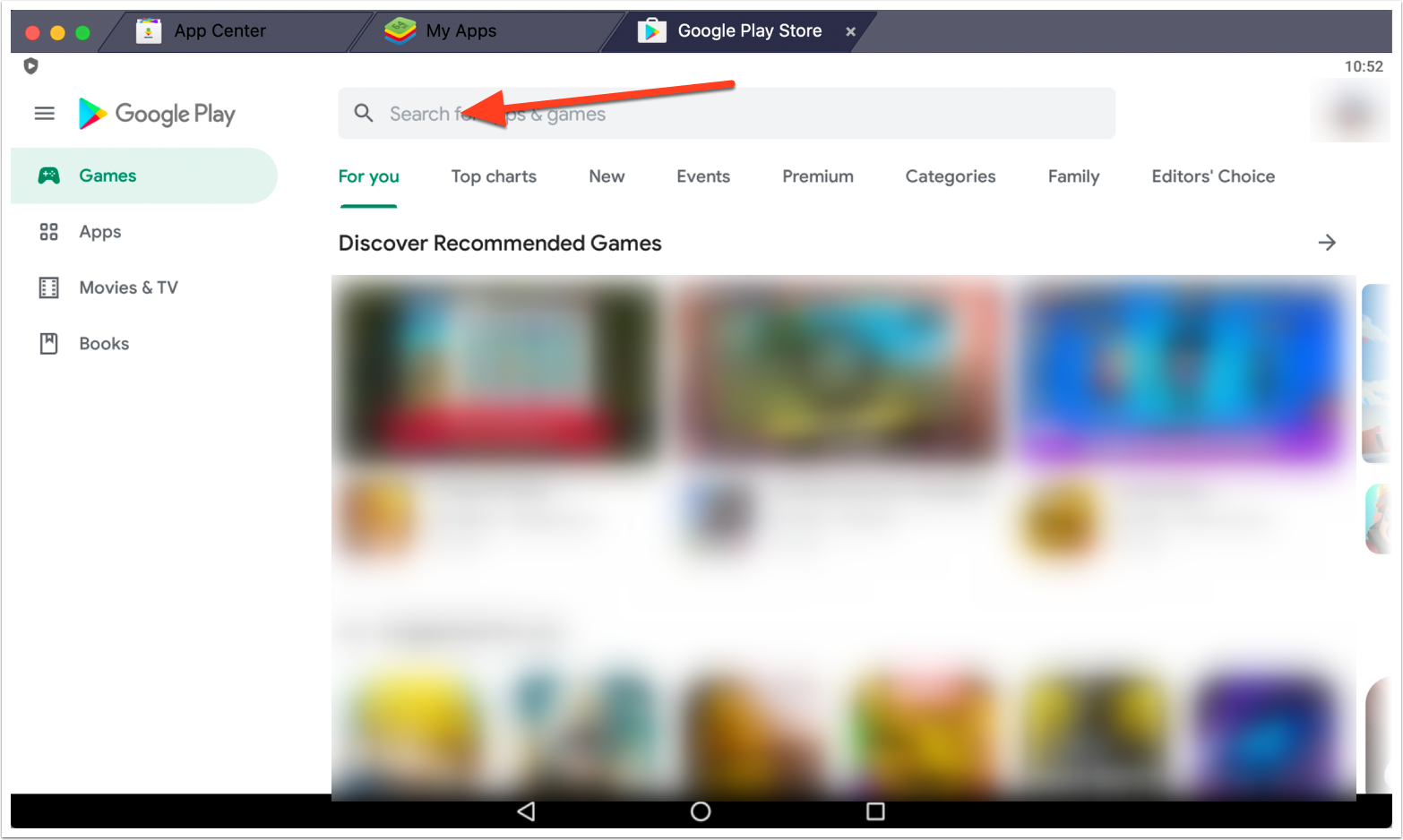 Type in “JW Library” into the search box and press enter. 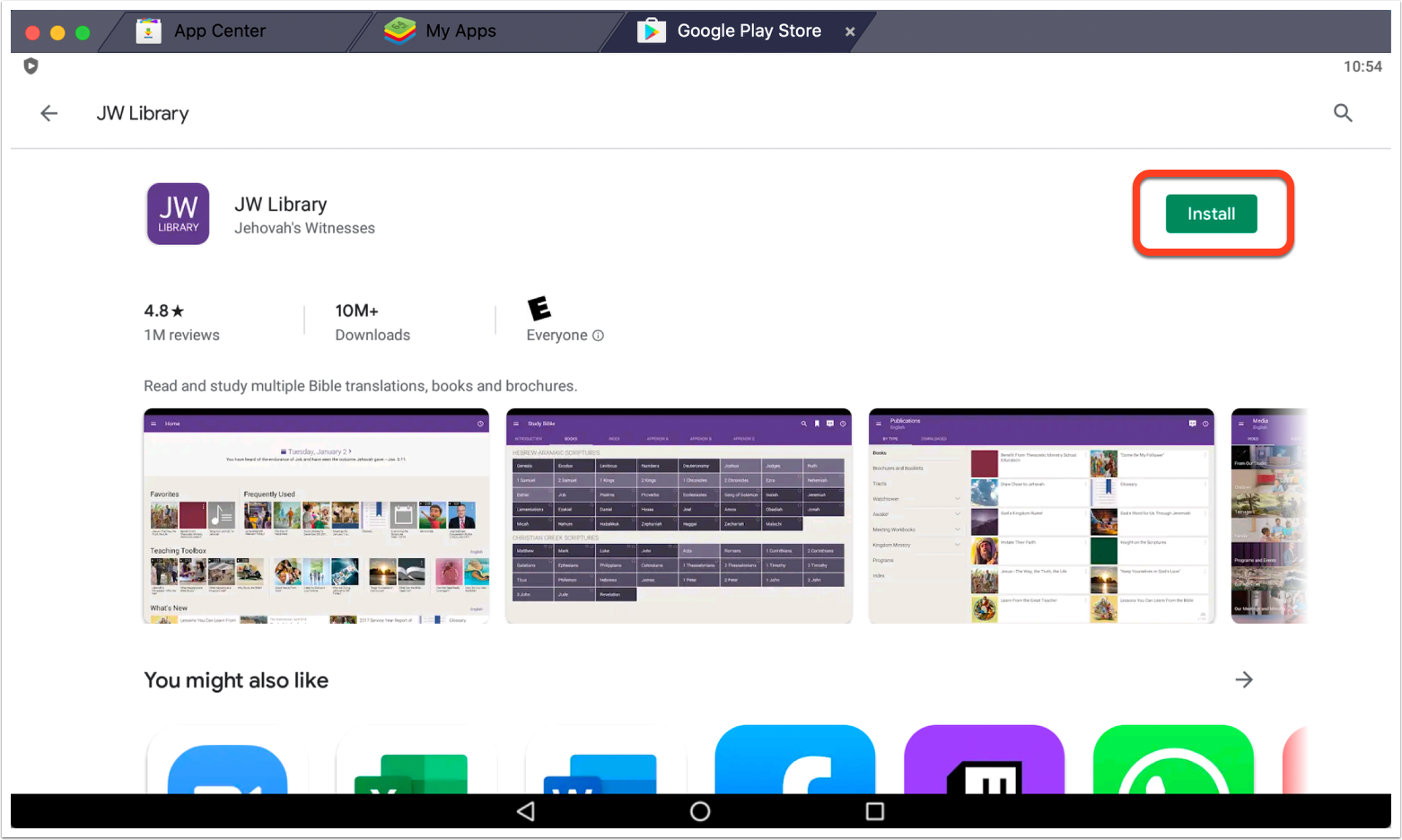 After it installs, the button will change to “Open”.

Click on the “Open” button to start JW Library. 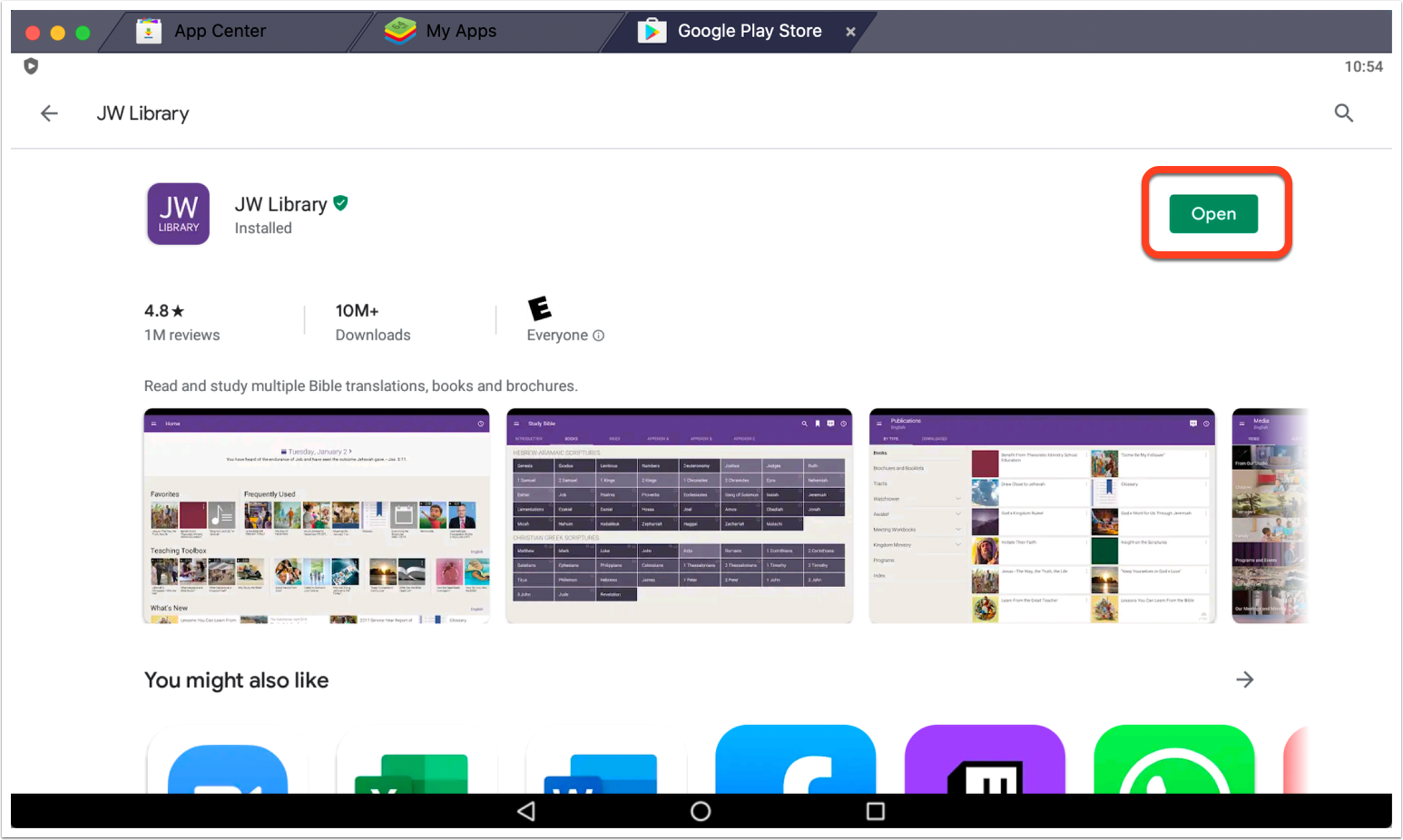 On first launch, you might be shown a “What’s New” for JW Library. Click on the “Continue” button to cycle through the new features. 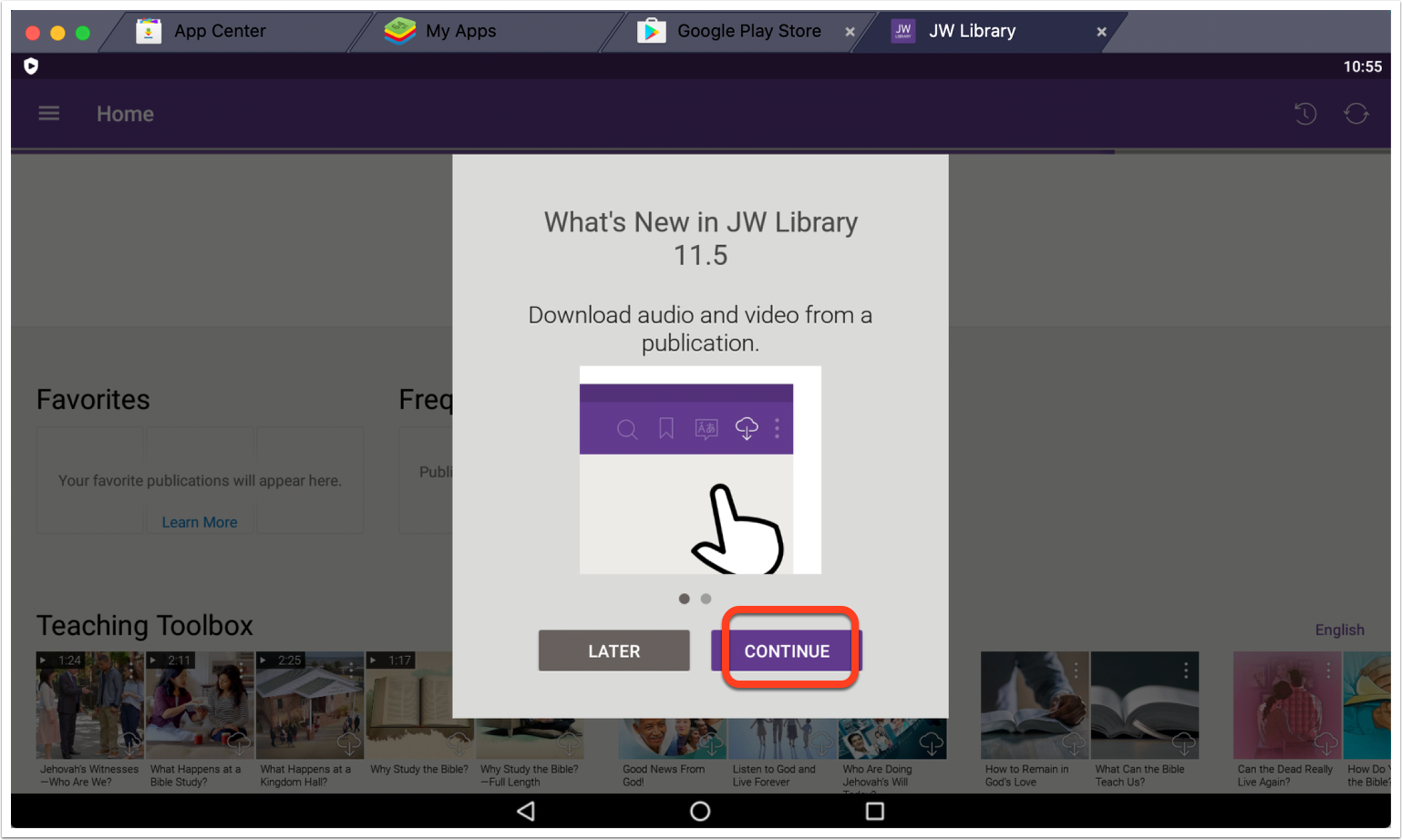 You will be prompted “Allow JW Library to access photos, media, and files on your device?“. Select “Allow” (which is necessary for JW Library to save media and other files).

JW Library will start. Now we need to download media and other files within JW Library so that we can use it for the meeting.

Click on the icon in the upper lefthand side of the screen (sometimes called the “hamburger icon”). 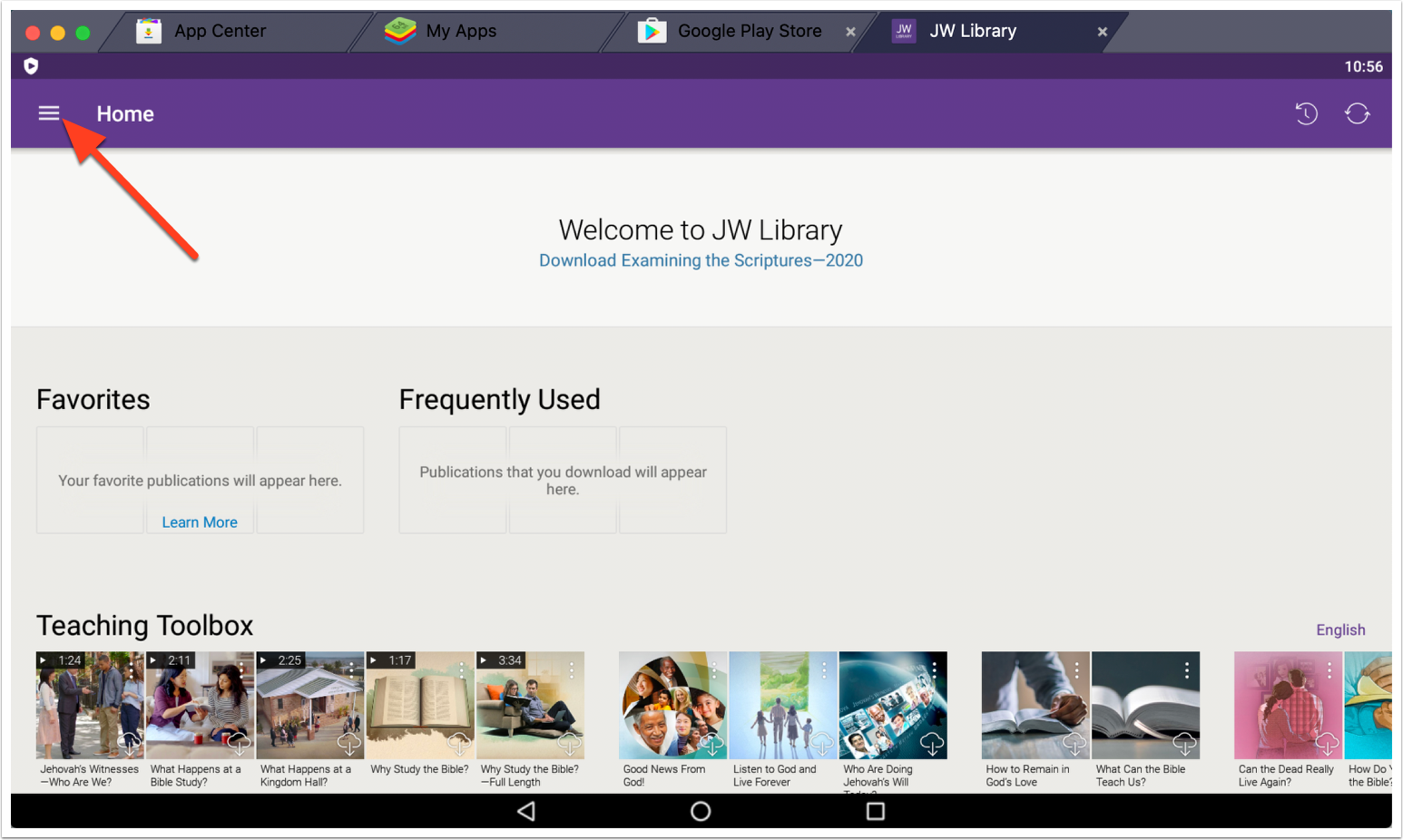 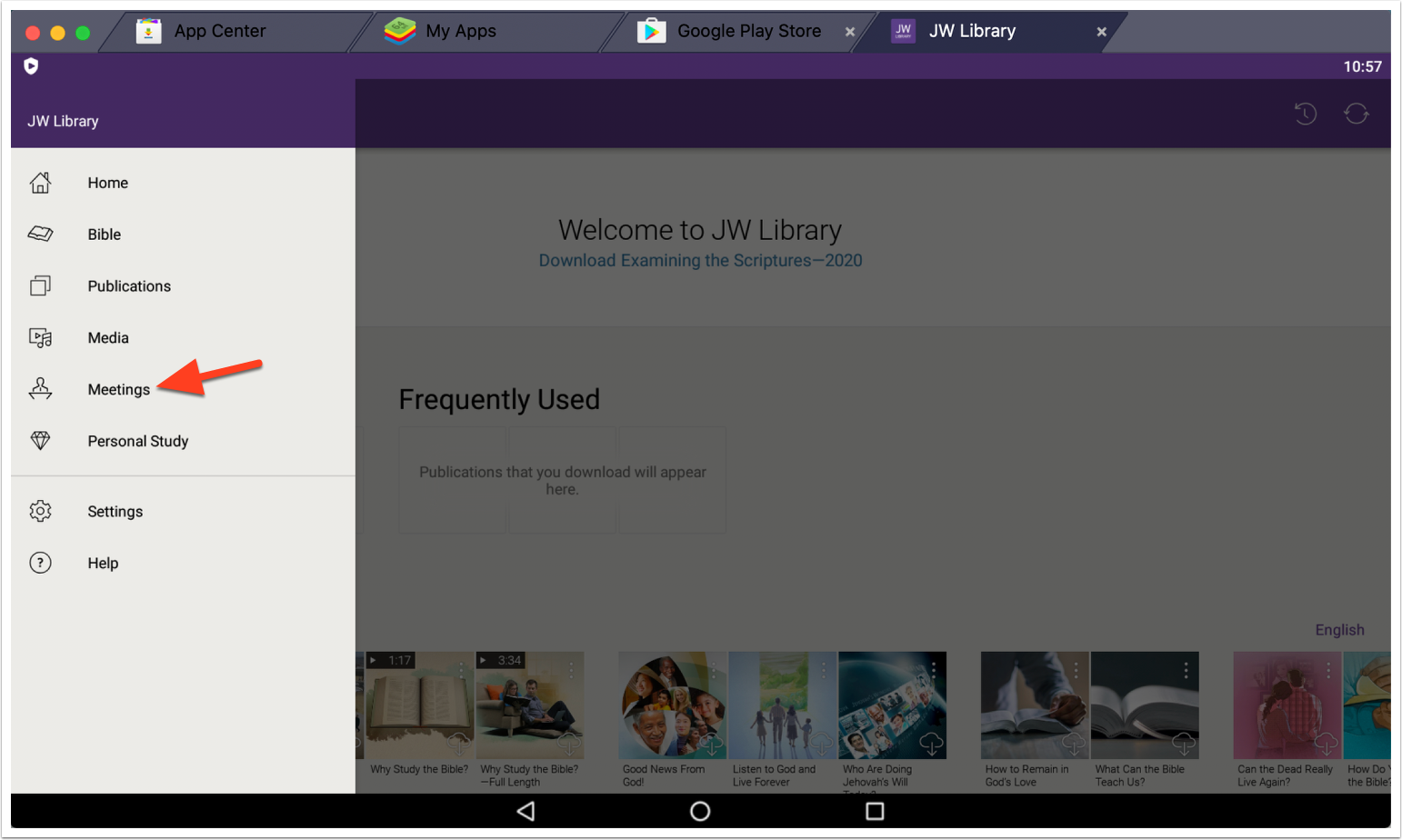 A meeting display for the week will be shown. In order to see the media for the meeting, we will need to download the source publications but clicking on the small “cloud” icon in the bottom right of each publication (1). 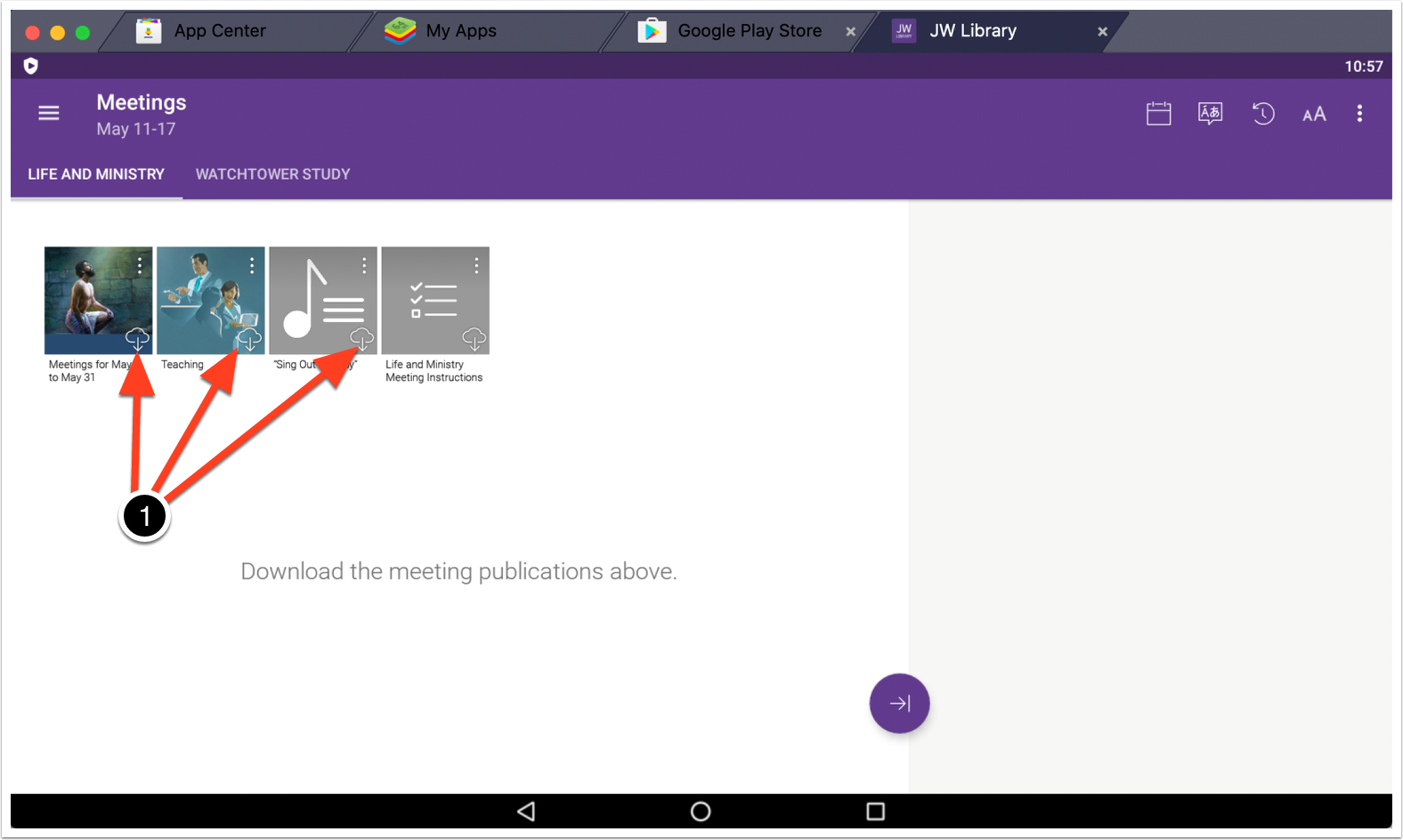 Once the publications have been downloaded, click on the “Media” icon in the upper righthand side of the screen. 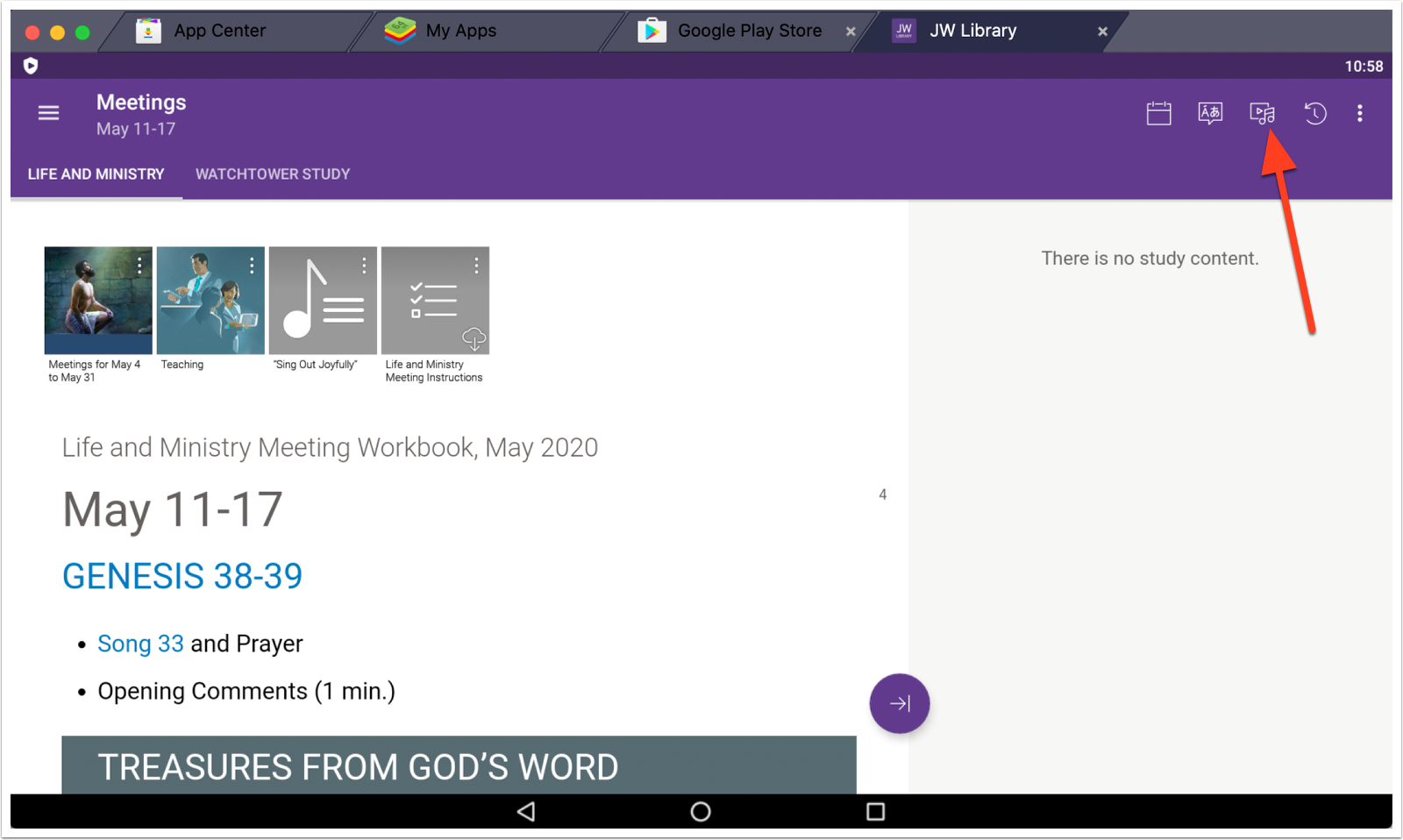 This will show all of the media available for that meeting (that was selected on the previous screen).

Click on the small “cloud” icon next to each of the videos (1) in order to download them. We have been directed to download all of the videos before the meeting so that playback isn’t affected waiting for the download (or stream).

(2) Once completed, it would be good to download all of the song videos so that all of those are ready for the meeting. To do this, click on the “3 dots” icon to show the “More Songs” menu. 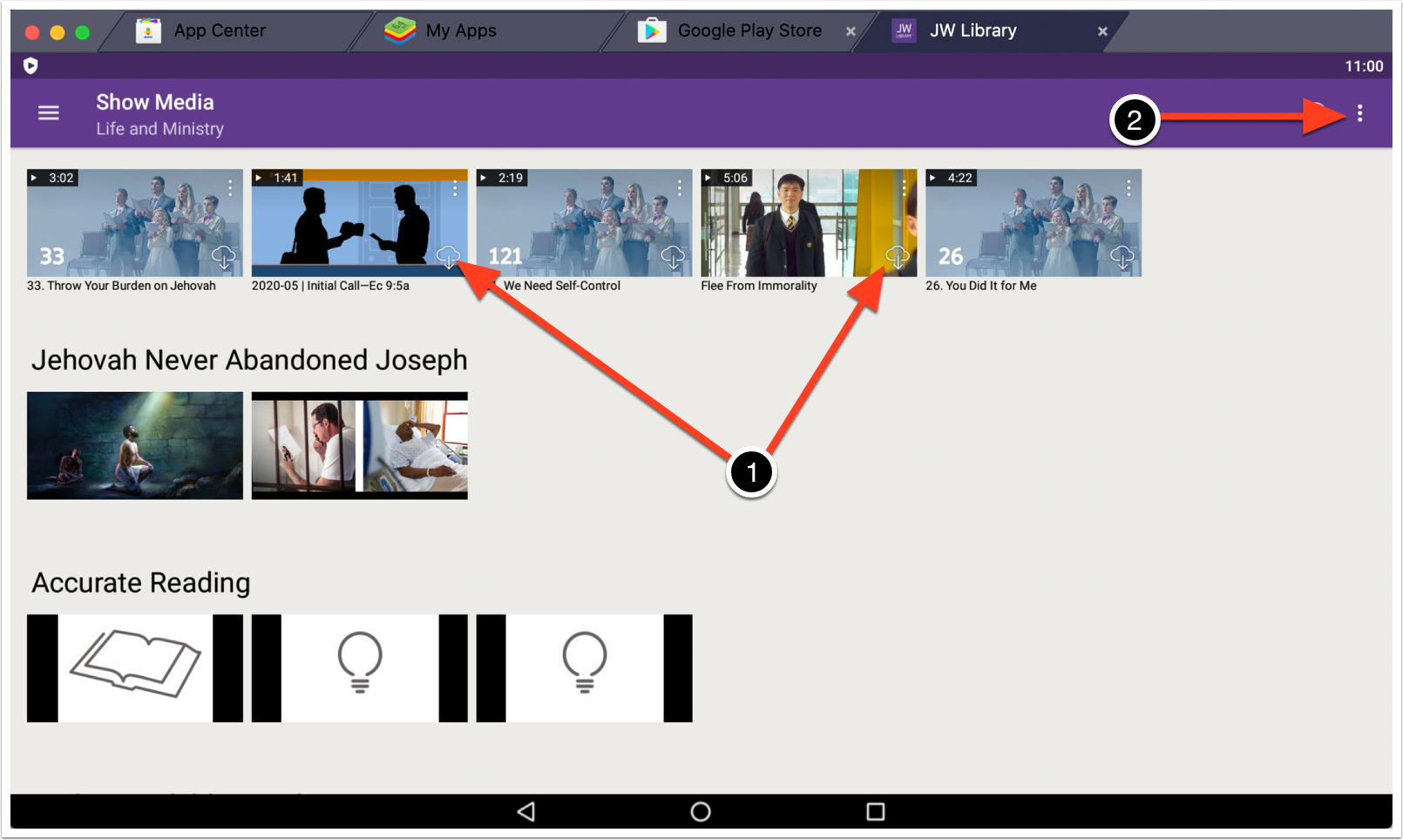 Downloading all of the Meeting Songs 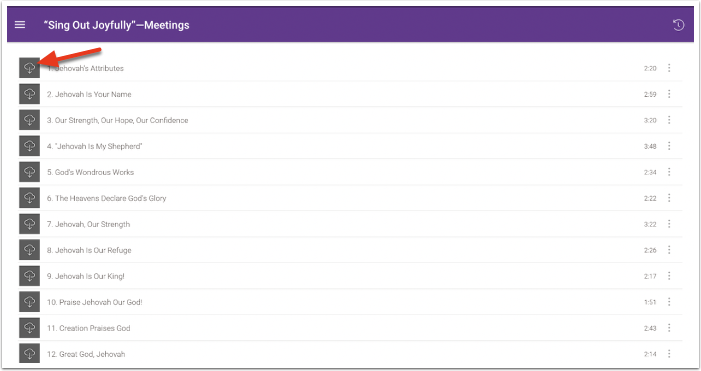 Click on the video version to download. I would recommend using the “720p” version of all videos for the clearest picture possible.

Currently, there are 151 songs that should be downloaded. 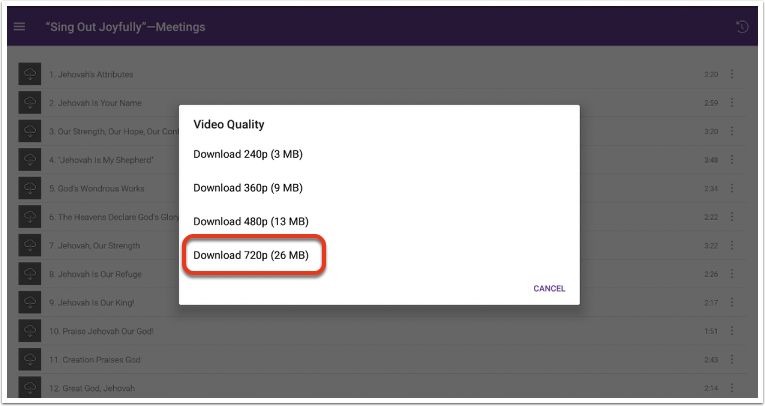 Playing Media for the Meeting through Zoom

To play media for the meeting hosted on Zoom, click on the “hambuger icon” to show the menu within JW Library. 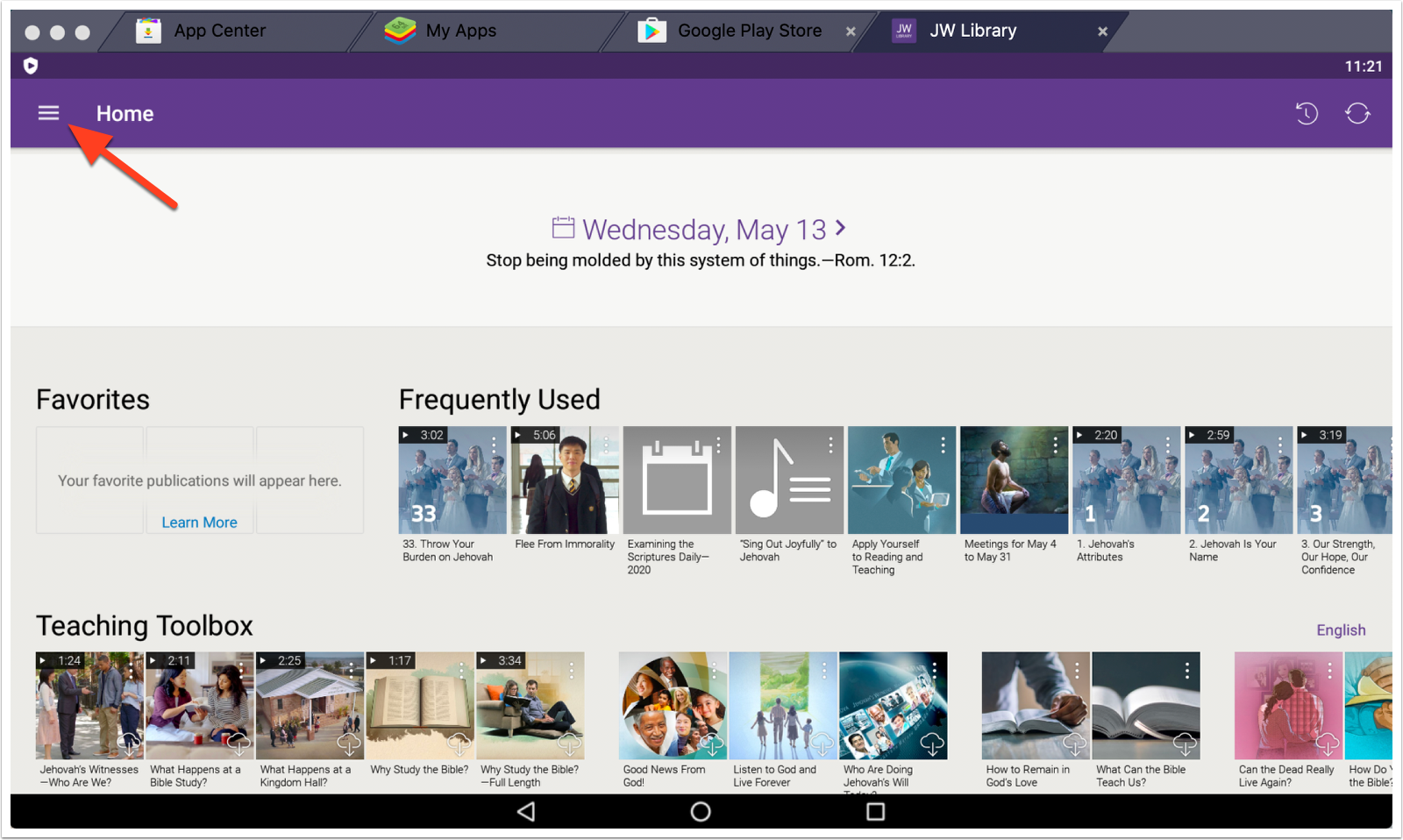 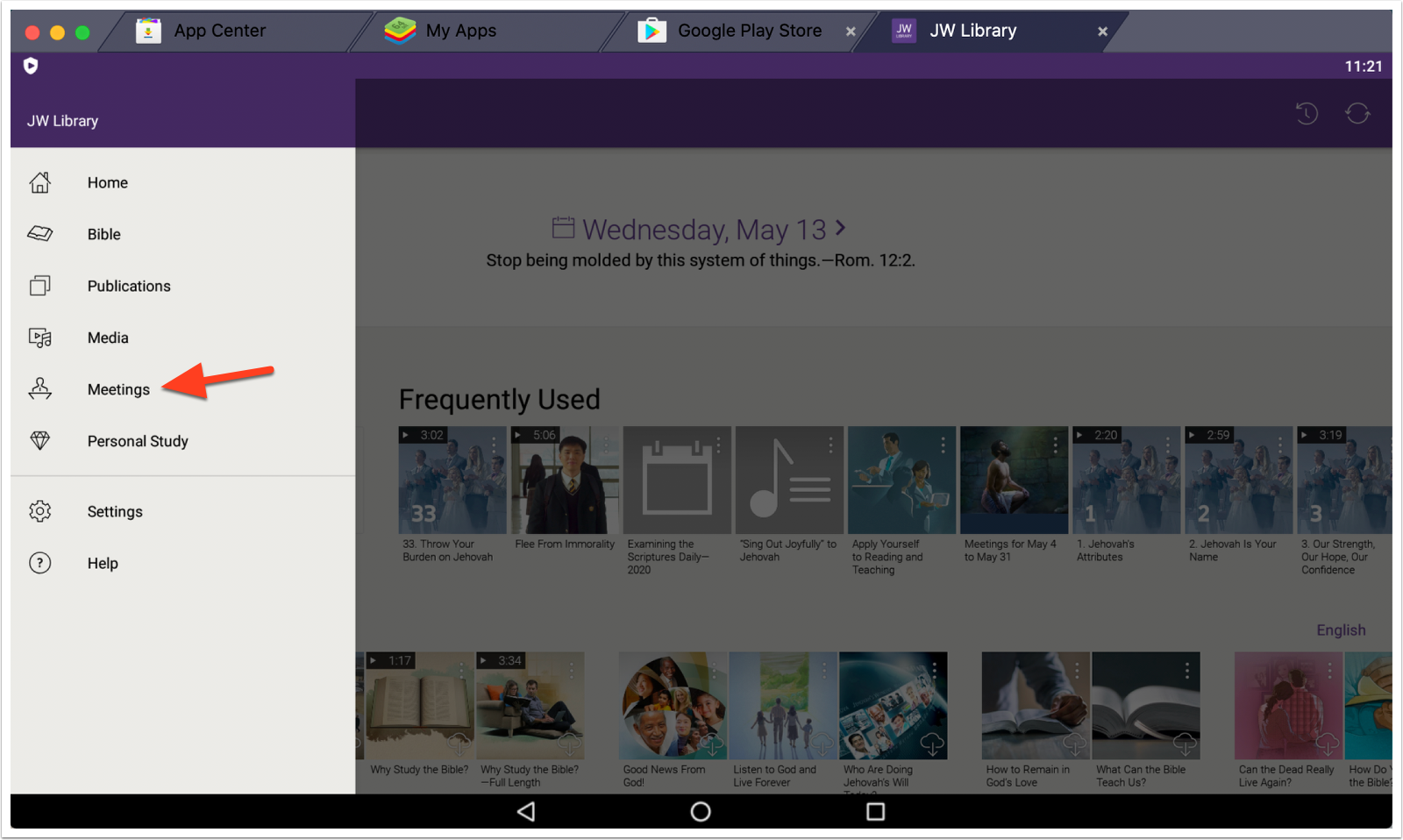 You should be taken to the appropriate meeting based on the date, but if not, select the meeting that you want to see the media for (1). 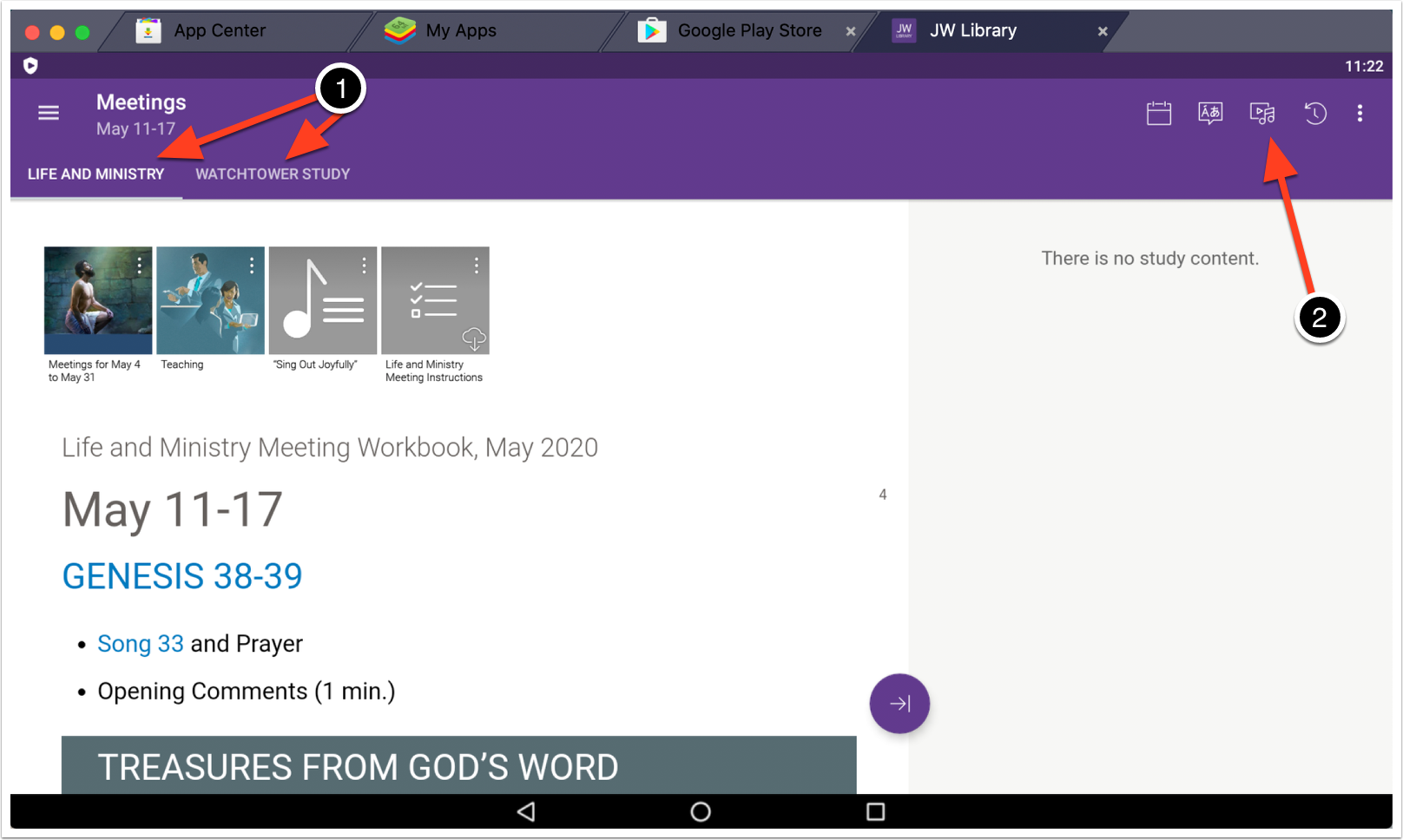 You are ready to click on the media and play it on Zoom (assuming all of the media for that week is downloaded beforehand).

In the next steps, I’ll show you how to share the screen within Zoom. 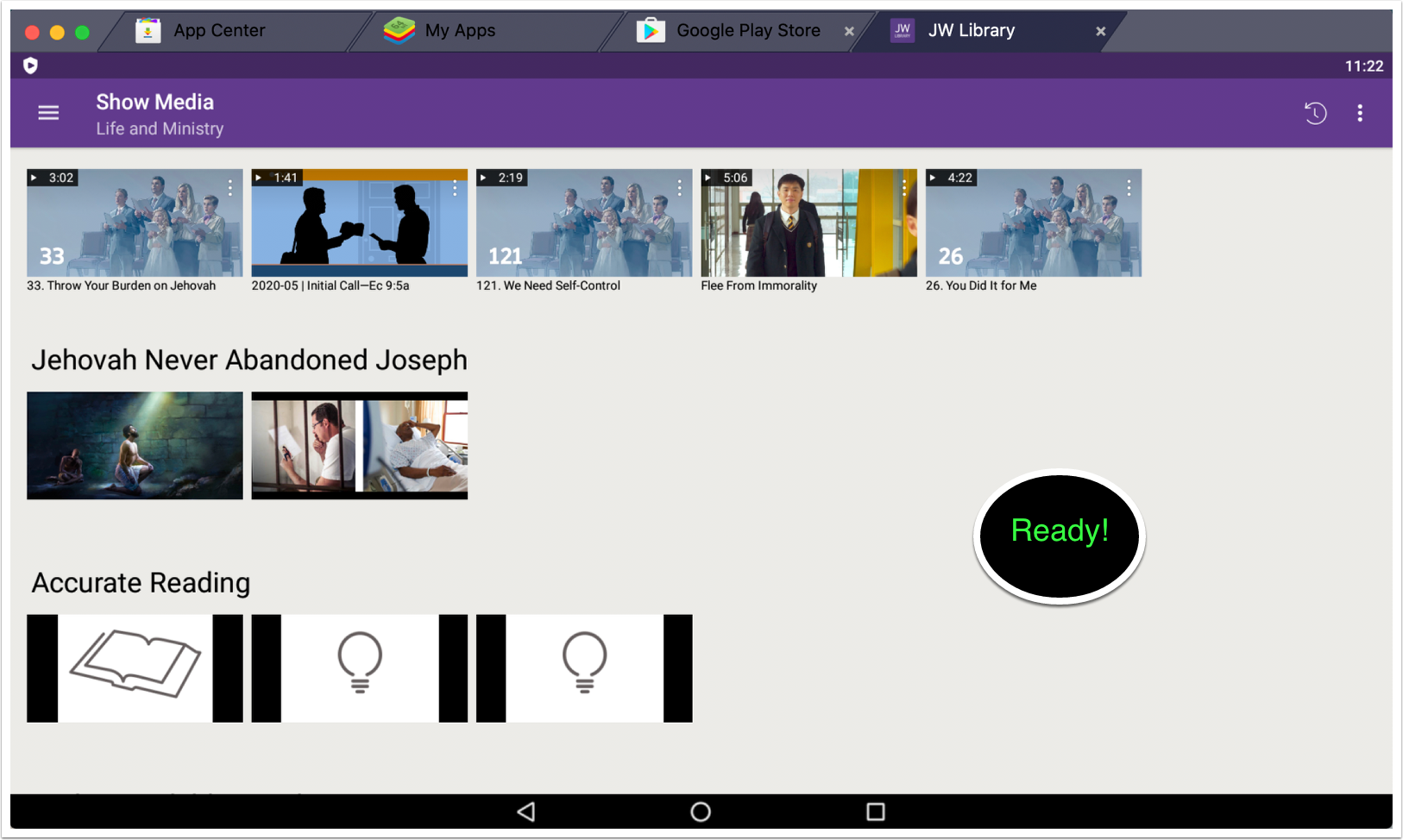 Sharing the Screen within Zoom

Once in the Zoom meeting, click on the “Share Screen” icon in the meeting controls bar. Make sure you are the “host” or a co-host in order to see this icon.

I typically select the area that I want to share so that it doesn’t show the media controls or other options during playback.

Note: You will need to do this when first joining the meeting in order to define the portion of the screen that you want to share. I typically do this once I join the Zoom meeting before the meeting and before the majority of the friends start joining. 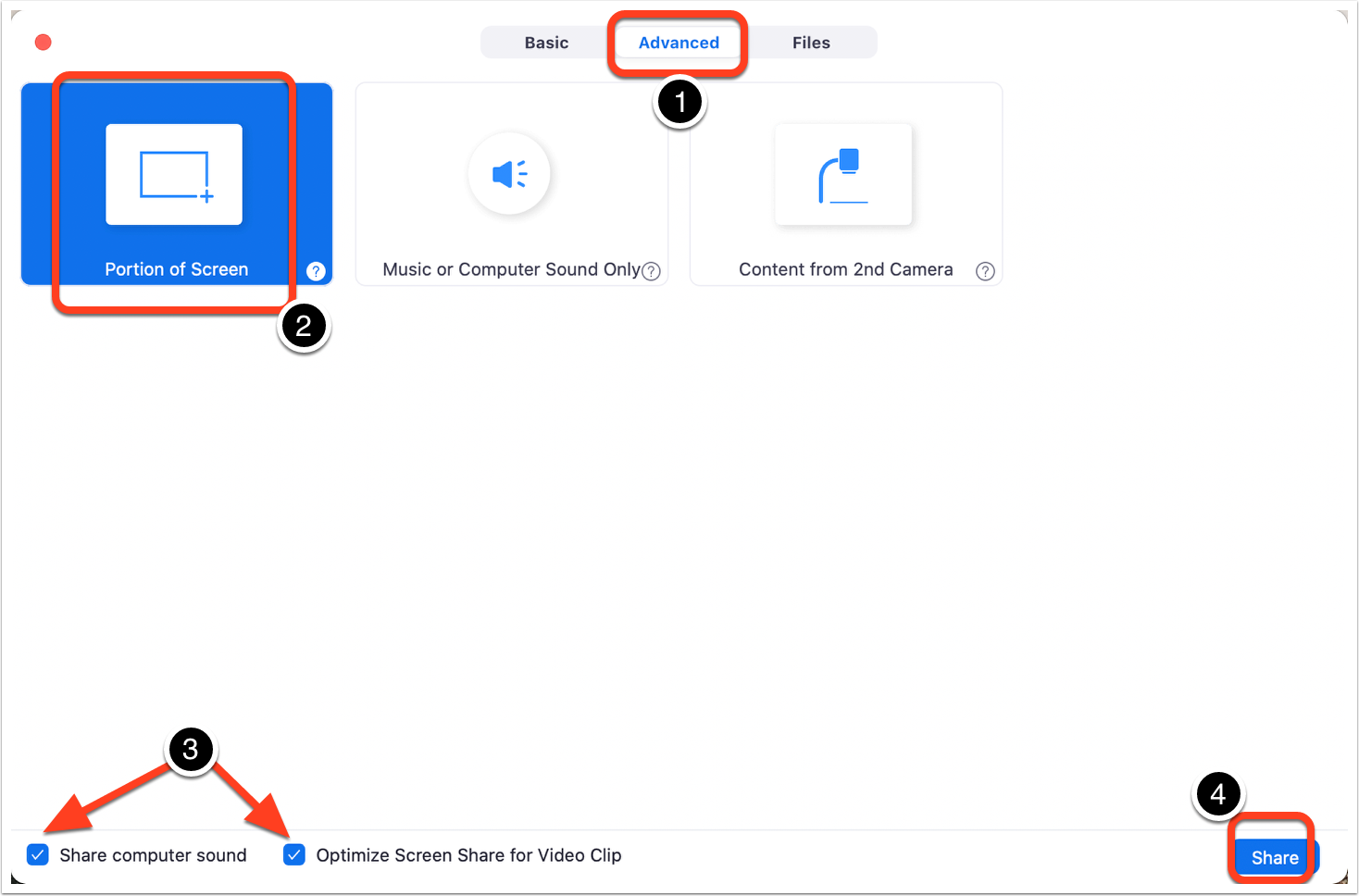 Once clicking on “Share”, you will see a green outline of what is being shared to Zoom. You can resize this green area by clicking on it and resizing the edges of the green rectangle to be located over the main area of the JW Library window. You might need to start a video to see how it lines up and then make adjustments accordingly. 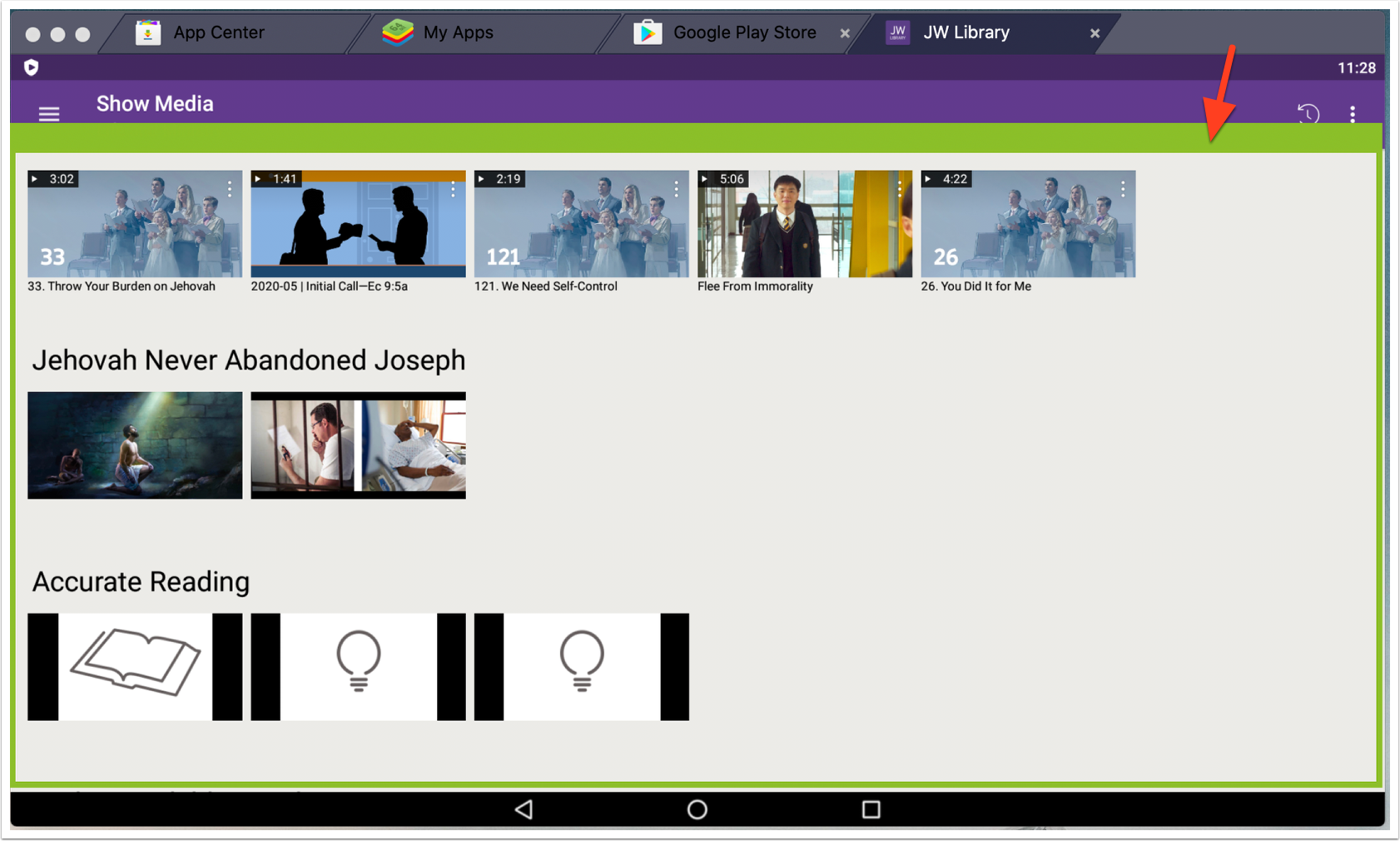 For example, here you can see where I have the “shared area” (within the green rectangle) at. This makes it so that only the main song video is shared through Zoom, without all of the menus and such. 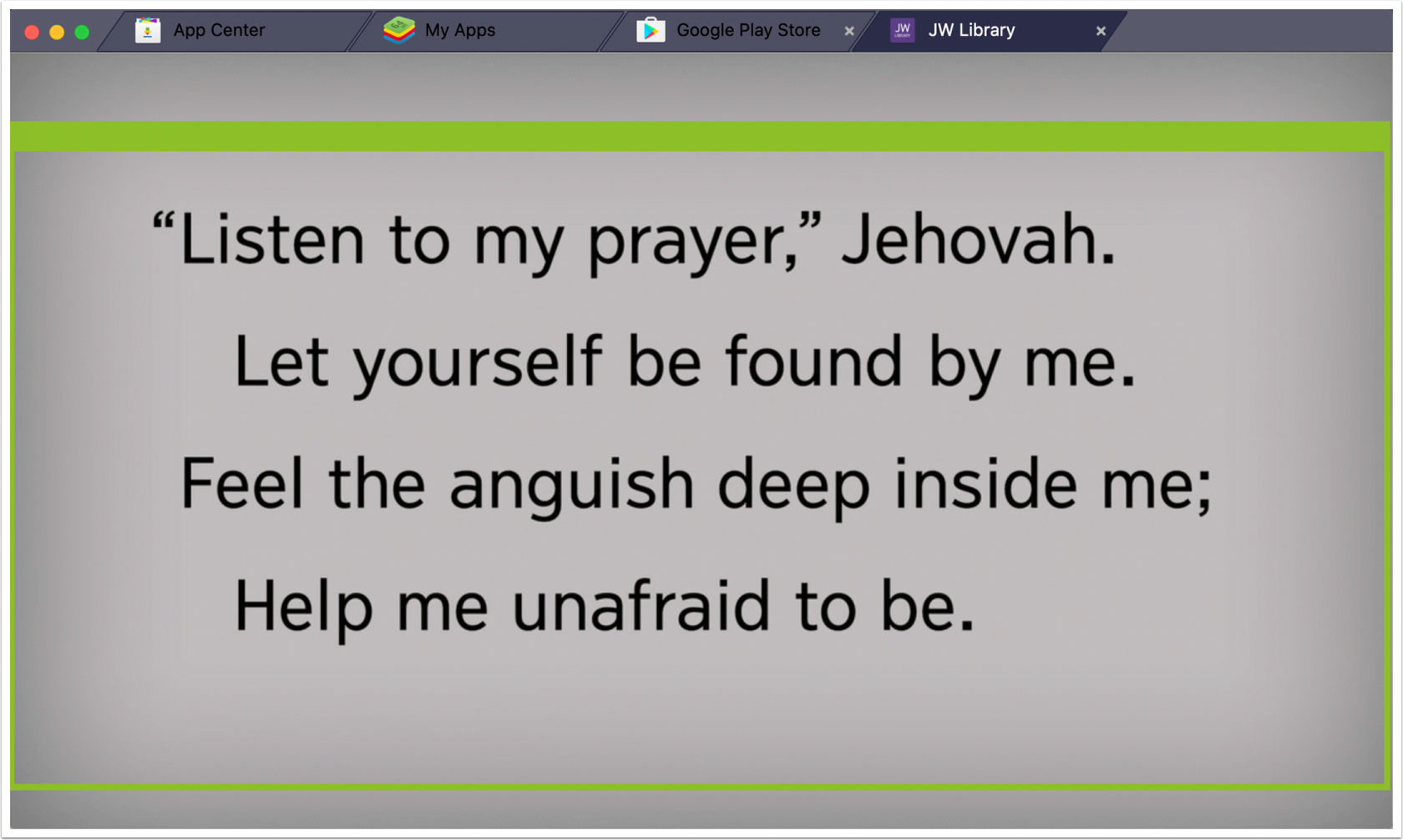 To stop sharing the video/media, click on the “Stop Share” button in the Zoom meeting controls. Typically, you would do this when the song concludes or when you want to stop showing the media with the meeting attendees.

That’s it! You can now use the JW Library app (for Android) on your Mac, to share meeting content easily on Zoom! Whenever you need to access it, just open “BlueStacks” which will be in your Applications list. Just click on the “JW Library” icon once BlueStacks starts, and you’re ready to host again.

This site uses Akismet to reduce spam. Learn how your comment data is processed.